Nick Bonino and Phil Kessel each get 1 goal and 4 assist!  This is a first for both.  No offense here but its surprise Kessel hasn't done this before? This is a pleasant surprise for Nick Bonino as well.

Not bad for a second line.  That might be the understatement of the season.  With this this close to the post season this big win couldn't have come at a better time.  It only helps reinforce there spot int he standings.  Red Wings were tied for a wild card spot on the outside looking in.  Now they are just on the outside.

When they pulled Petr Mrázek, I knew they were in trouble.  It was all down hill after that.
Posted by Unknown at 5:04 PM No comments:

Our first ever "field report” - we are watching the game at one of our favorite spots, and by " we" I mean three contributing authors to the blog: Stefan, Jenn, and myself.

Stefan says that outcome of this game might be a predictor of the Western conference finalist...and as I'm writing this, the Kings already scored twice. That definitely sets the tempo, but the Blackhawks are mad and awake now. 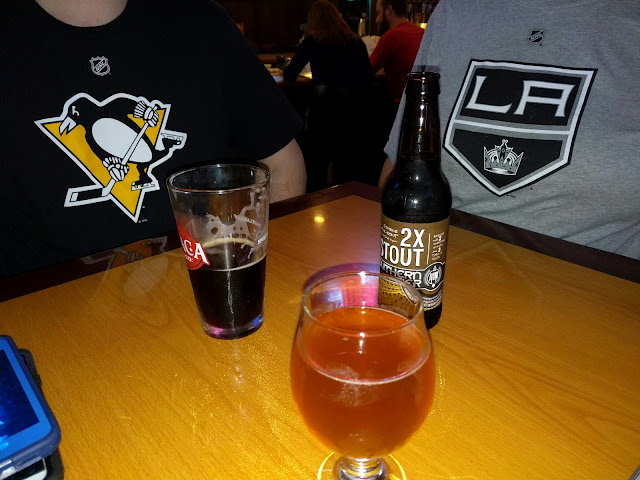 Posted by Mirvana at 8:26 PM No comments:

So effective this morning Tom Sestito was sent back to the minors this morning.  It is not at all shocking since he was an apparent healthy scratch against the Blue Jackets game on Friday March 11th.  If you recalled he made some public statements about taking around at Brandon Dubinsky.  This set the stage for this re-assignment.

As it stands right now, his stats this season on the Penguins looks like this.  2 games, 2 penalty minutes and  9 minutes of ice time?

Here is my take on it.  He is a Velociraptor.  Its like he is some throw back to different era.  With the state of affairs in the league right now, there isn't room for this type of dinosaur.  Its like the two games he played coach  Rick Tocchet was his handler?  They bring him up form the minors as a novelty.  Its like look here, we have an old school enforcer.

Tom Sestito is almost a nuclear deterrent.  See the metaphor there?  Yeah he may fight.  He may win.  But at what cost?  Crazy penalty minutes the team doesn't need? League sanctioning?  Non of that helps the Penguins get to the post season.
Posted by Unknown at 12:39 PM No comments:

Really bad - for the Canadiens. I hate to say this, but they can probably forget about the playoffs, because without P.K. Subban, they don't have much of a game. Ok, they have Price...maybe. He skated in full equipment before practice Monday, but there is no time table for his return from injured reserve status. Without Subban or Price, I don't think the Canadiens can pull it off this year.

The really sad thing is, Subban had an amazing game last night. Just before puck drop, he received the Jean Béliveau Trophy. He then went on to log 29:55 minutes on the ice against the Sabres, including a whopping 6:57 shift during which he made his 45th assist (a career high) of the season.

However, as Subban was carried off the ice on a stretcher, he did give the crowd a thumbs up, and the Candiens' latest update says that he does have "normal movement" of his extremities, which is good news. Perhaps we will see him and Price on the ice again this season. One can only hope.
Posted by Mirvana at 9:27 AM No comments:

As many you know Tom Sestito was recalled by the Penguins on March 6th. The Penguins had a landslide victory against the Devils 6 to 1.  He and Jordin Tootoo had a little dance.  Say what you will about how that went.  It did set up a power play that Evgeni Malkin scored on.

The Penguins will be playing the Blue Jackets on Friday March 11th.  With the fight between Sidney Crosby and Brandon Dubinsky on February 19, 2015.  Its safe to say that Dubinsky should be on notice that he and Tom Sestito may have a dance this Friday.

Here is what you might not know.  Coach John Tortorella knows Tom Sestito all to well.  He coached him on the Canucks in the 2013 / 2014 season.  You may remember him fighting Jordan Nolan (Kings) on January 13th, 2014.  It was more of a mugging then a fight.  Nolan did not even get his gloves off.  So Tom Sestito got 27 penalty minutes for that incident.

He had also played on the Blue Jackets as well for all of 13 games.  So both the team and the coach know what to expect from Tom Sestito.

So the real question here is will Brandon Dubinsky behave? or does it even matter?  I can imagine this scenario - Tom Sestito skating out towards the face off circle and saying something like "hey Dubinsky, you know why I'm here"? as he throws the gloves off and mugs him.

I guess there is a chance that he will not fight,  just his presence may be enough deterrent?
Posted by Unknown at 4:18 PM No comments:

Marc-Edouard Vlasic is a 29 year old Canadian defenseman who currently plays for the San Jose Sharks.  Outside of the Pacific Division of the NHL very few fans know who he is.  Vlasic played hockey in high school at College Sainte-Anne High School and then for an additional year at West Island College.  He was then picked up by the Quebec Major Junior Hockey League. There he played for  seasons on the Quebec Remparts.

Vlasic was drafted into the NHL 35th overall in the 2005 entry draft by the San Jose Sharks.  He has remained on the Sharks for the entirety of his NHL Career to date.  Vlasic currently has a 5 year 21 million dollar contract with the Sharks that will be completed at the end of the 2017-2018 season.

Vlasic works paired with Justin Braun as the 2nd line defensive team for the Sharks right now.  Though not as flashy or well know as the Brett Burns Paul Martin paring, Vlasic and Braun have consistently and effectively contributed to their teams success.  Over the last 5 games Vlasic has averaged between 18 and 20 minutes time on ice.  He has played 60 games so far this season with 8 goals and 29 assists for a total of 37 points so far.  This has been Vlasic's best year in the NHL by far performance wise, he seems to have become a much more consistent and confident player during this season

Congratulations are in ofder for this 29 year old  defenseman, he was earlier this week selected to play for Team Canada in the World Cup tournament.  Many people were surprised when Marc-Edouard Vlasic was named in the first 16 players to Team Canada for the World Cup of Hockey this year.  What a lot of people may not remember or even have known is that this will not be Vlasic's first time playing in an international tournament of this caliber.  He was in fact a member of Canada's 2014 Olympic Hockey team which won the Gold medal that year.

We look forward to seeing Marc-Edouard Vlasic continue to shine in the remainder of this season and hopefully well into the playoffs also.  Congratulations and best of luck to him and his Team Canada teammates in the upcoming World cup as well!
Posted by Jennifer Blanchard-Brown at 12:47 AM No comments:

With the current stare of affairs in the NHL there is a  concept of the 1A / 1B goalie.  Maybe not a new concept.  By this they mean there are two net minders sharing roughly equal time.  It used to be that there was one starting (primary) goalie and one backup goalie.   The starting goalie was expected to play about 60 games.  The back up the rest.  So approximately 22 games a season.  That formula has work for years.  With the 1A / 1B concept you guess it.. each goalie would play about 41 games each.

Now lets take a closer look at the 1A / 1B concept.  There is in theory a lot of advantages.  Back to back games for one.  Its almost a given you would start one on one night and the other on the other night.  If one of the goalies needs a maintenance day they can "rest" a day.  The other goalie simply starts two in a row and they can adjust the rotation accordingly.  They can also pick the right goalie to play certain teams.

A perfect example of the 1A / 1B concept is the Florida Panthers.   Roberto Luongo and Al Montoya both share net minding duties.  Both are veterans.  Roberto Luongo gets a few more starts then  Al Montoya does.  One interesting side note about Al Montoya is that for his level of play and experience, he has only played in 129 NHL games.

A couple  other notable success stories (with varying degrees of success) with the 1A / 1B concept are.  Blues with Jake Allen and Brian Elliot.  The Ducks with Frederik Andersen and John Gibson.

In contrast lets look at Roberto Luongo and Al Montoya numbers.  Roberto Luongo is currently at SV% .925 and GAA of 2.24.  Al Montoya is at SV%.910 and a GAA 2.59.  That in part maybe be why he starts less then 50% of the games.  But still more then a traditional back up goalie would.

So at first look the numbers are way off. Consider that Kari Lehtonen had a SV% .903 and a GAA 2.94 for last season.  Those are NOT Stanley Cup numbers.  At a reported 5.9 million last season!  So my conclusion is that they they are in a play off spot because of great offense in spite of lack luster goal tending.

So I would say that the 1A / 1B concept is NOT working out with the Stars.   Lets briefly look at one of the other two pairs that were mentioned.

The Blues are right on the heels of the Stars.  They are tied with 83 points each.  As you can see there is better goal tending going with the Blues.
Posted by Unknown at 7:54 AM No comments:

Jarome Iginla scored his 608th career goal against the Wild tonight.  That ties him with the legendary Dino Ciccarelli.  After this Bobby Hull's record is next with 610 goals.

It is very likely that Jarome Iginla will surpass the 610 goal mark by the end of this season.  He is currently at 19 goals for the season.  His current contract goes until the end of next season.  Next year will also mark his 20th season in the league.

Jarome Iginla help defined a new breed of players.  The Power Forward.  These are big physically tough players.  They can dig the puck out of the corners.  With two seasons with 50 or more goals... He is a goal scorer !

Will he be able to beat Joe Sakic record of 625 goals by the end of his career?  It is entirely possible.


With 488 games played Patric Hörnqvist got his first career hat trick against the Coyotes.